While many mechanical parts are directly taken from the Mustang, still other parts were taken from other cars and their manufacturers parts bins. In other cases, the Mustang parts themselves are no longer available.

Another option that is the same size would be the Command Electronics LED RV Dome Light if you're not so concerned about keeping it original. Some adjustment to the inner trunk carpet and backer board may be required with this part. 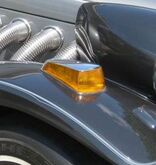 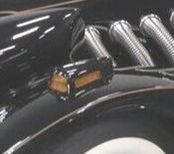 (Late) Front Turn Signal - Sometime in late 1985, Zimmer stopped using the chrome upper housing and used a different housing as seen here. The lens is still the same and is available separately from the above part, like this one from JBugs. There are, as yet, no known sources for this later upper housing.

Rear Side Marker - This part appears to have been used through the entire run of Golden Spirits and, at the time, was a fairly common Toyota part, used on the 1973-1978 Corona and 1978-1980 Cressida. Nowadays, it's not nearly as common and appears that no one has (yet?) reproduced the completely assembly or even the lenses. 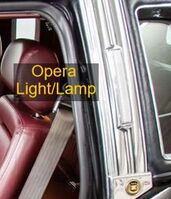 Opera Light aka Opera Lamp - It's unclear if this same lamp was used on all Golden Spirits, but at least some used the GEM 476. GEM Manufacturing went out of business some years ago, but these still show up either in chrome or gold plating (sometimes even new in a box!) on Ebay.
Got something to add to this list? Contact us!